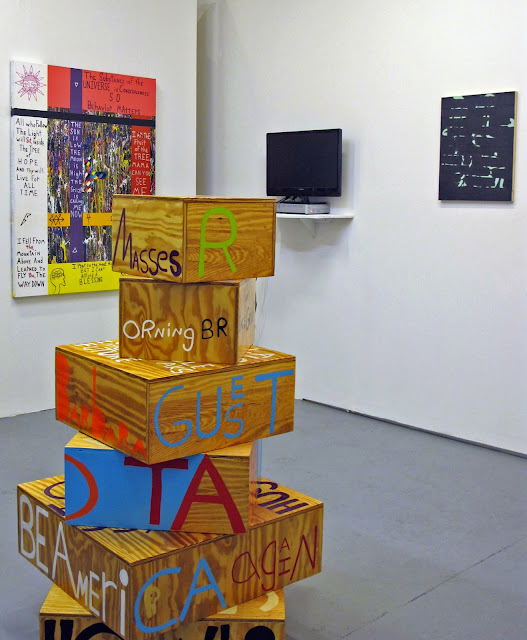 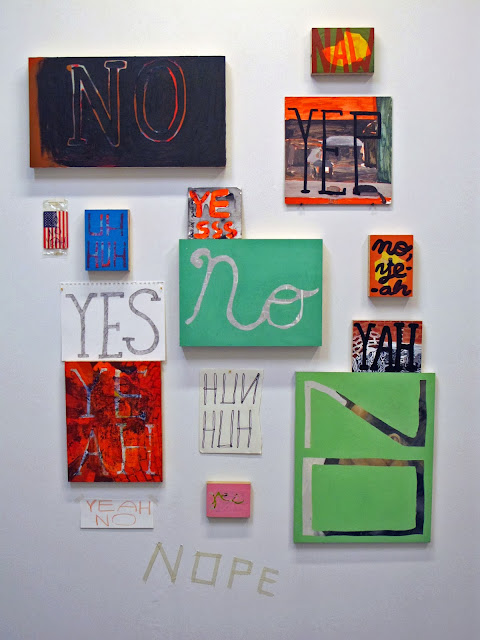 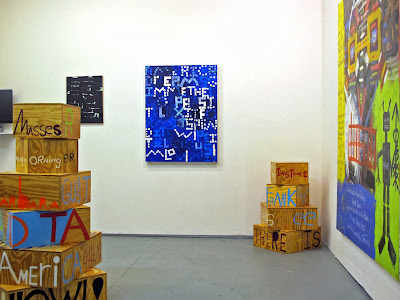 Posted by KL at Monday, September 09, 2013 No comments:
Email ThisBlogThis!Share to TwitterShare to FacebookShare to Pinterest

Poetry Slam is a show featuring four artists who use text in their work. The works in this show ranges from painting and drawing, to installation, sculpture, and video. damali abrams, Jessica Campbell, Samuel Jablon, and Mwamba-Salim Wilson work with different content and materials, but share an emphasis on a direct and arresting use of language in their art. Traditional poetry slams consist of participants performing their spoken word/poems for an audience within a limited period of time, with rhythmic and emphatic presentation.
Forget that the use of text as image challenged illusionistic space in visual art. Or that text significantly contributed to the development of collage and to our notion of contemporary composition in art. These artists go further…. damali abrams’ video pieces address the nature of performance in intimate, thoughtful dialogues. Jessica Campbell uses wit and humor in her work with an intense subjectivity that is intellectually and visually captivating. Samuel Jablon plays on poetic sense and nonsense, legibility and illegibility, while embracing formal concerns that come from using text as image. And Mwamba-Salim Wilson embraces the powers of symbols and idiosyncratic narratives that combine political commentary, cross-cultural signs, and personal revelations with painterly abstraction.
These artists engage with language inflected with their own individual histories and interests, in ways that disrupt and complement their visual vocabularies. In Poetry Slam, there is an intuitive use of language that is as much a part of the creative flow of ideas as the visual elements that form the artworks.

-------------------------
damali abrams is a New York City-based artist working primarily in video. She received her BA at NYU and her MFA at Vermont College of Fine Arts. She was a 2009-10 A.I.R. Gallery Fellowship recipient. abrams work has been shown in New York, New Jersey, Philadelphia, Memphis, New Orleans, Denver, and Miami. In New York City, her work has been exhibited at The Museum of Contemporary African Diasporan Art (MoCADA), A.I.R. Gallery, JCAL, Rush Arts Gallery, BRIC Rotunda Gallery, and upcoming at El Museo del Barrio. damali is a member of tART and a NYC coordinator for The Feminist Art Project. She is currently working on a performance art documentary, posting one chapter each month online, as part of an offsite residency with the organization Fresh Milk in Barbados.

Jessica Campbell was born in 1985 in Victoria, B.C. She lives and works in Chicago, IL. Campbell completed her undergraduate degree at Concordia University in Montreal, and is a current MFA candidate at the School of the Art Institute of Chicago. Between 2006 and 2012, she worked as a designer, publicist and editor for the graphic novel publisher Drawn & Quarterly, and she is currently teaching in the continuing studies department at SAIC. Campbell makes drawings, paintings, installations, and comics. She is represented by Laroche/Joncas (Quebec), and TW Fine Art (Australia). Campbell’s comics are published by micro publisher Oily Comics.

Samuel Jablon is an artist and writer, living and working in Brooklyn, NY. He makes drawings, paintings, and sculptures. Jablon received a BA in Poetry from Naropa University, and an MFA in Studio Art from Brooklyn College. He’s been published in Phati’tude, BOMB Magazine, Two Coats of Paint, The Huffington Post, and Hyperallergic. He has performed and exhibited at the MoMA, Socrates Sculpture Park, the Banff Centre, the HOWL Festival Hunter College, White Box, and Show Room 170. Jablon’s project the “Poet Sculpture” will be exhibited at the DUMBO Arts Festival, and Queens Museum of Art

Mwamba-Salim Wilson born 1980 in Houston, TX. Wilson lives and works in Brooklyn, NY. He works primarily large-scale using acrylic and mixed media on canvas and wood panel. Wilson began as a graffiti artist in the late 90s in Houston, TX and later developed into a self-taught and self-described Primitive Abstract and Primitivist painter. His work has been exhibited nationally, including at Robert Hughes Gallery, Contemporary Arts Museum in Houston, and Austin Museum of Art: Art House; and internationally at the Guildhall Art Gallery, London, UK, and at YOD Gallery, Osaka, Japan.