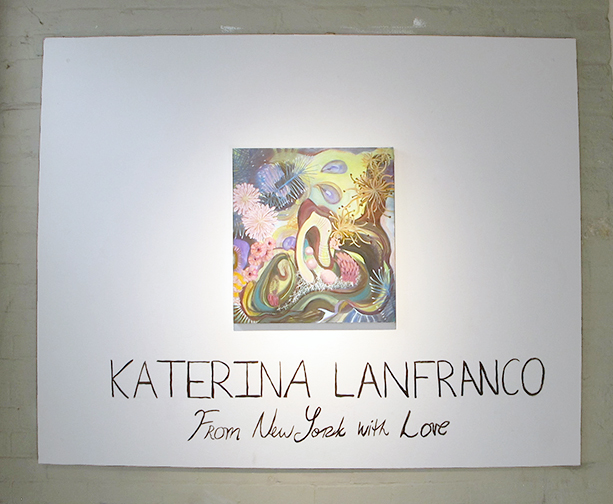 "From New York with Love" is Katerina Lanfranco’s debut solo show in Toronto. The show is comprised of works on paper, collages, cut-outs, paintings, sculptures, and site-specific installations. Lanfranco grew up in Toronto and was one of Red Head Gallery's first interns. Now based in Brooklyn, New York, she exhibits her work internationally.

Katerina Lanfranco received her MFA in Painting from Hunter College, City University of New York. In 2010, Lanfranco was a National Endowment for the Arts Creative Arts Fellow as part of the Japan-US Friendship Commission, and did a 6-month artist residency in Kyoto studying traditional Japanese arts. She has been awarded artists’ residencies at the UCSC Sesnon Gallery, Byrdcliffe Art Residency, Vermont Studio Center, and at the Elizabeth Foundation. She teaches drawing and painting at Hunter College and the Museum of Modern Art. Lanfranco has exhibited internationally, and her artwork is in several permanent collections including the Museum of Modern Art, the Kupferstichkabinett (Museum of Prints and Drawings) in Berlin, Germany, and the Corning Museum of Glass. She is the founder and director of Rhombus Space, an experimental exhibition space in Brooklyn, NY, and represented by the Nancy Hoffman Gallery in New York, and by the Piacsek Gallery in London. Lanfranco’s work addresses the intersection of nature, science, and fantasy. She explores metaphors of nature in relation to culture, cultural forms of framing and displaying nature, and how our concept of nature informs our construction of identity.